Hero Skills have been released for a while now, with even a new batch of offensive Skills released recently. But which skills are best in certain situations? In this article I while detail a number of situations and sketch a number of ways on which Skills are most useful in each. Some are very straightforward, others require some more thought. In the end, this will not be a long or difficult read, but could be helpful to some…

END_OF_DOCUMENT_TOKEN_TO_BE_REPLACED

The Alliance Boss Kill tournament got introduced shortly after the introduction of Alliance Bosses on the campaign map. During normal play, the Bosses can be summoned and killed to receive rewards including Vala Stones, gear, Valto runes and Gatherer Stones to level up your City Guardian. During Boss kill tournaments, you get points for killing the bosses. It is a pretty straightforward principle, so this article wil not be that long or complicated.

END_OF_DOCUMENT_TOKEN_TO_BE_REPLACED

With the new Lake-town campaign map, players have the opportunity to farm the levels for Bard’s gear or get them from the new Alliance Bosses. But unlike other drops, the gear requires other gear to be farmed before it becomes available in most cases. Just like with constructing some buildings, you need to work your way up if you want the complete set of Bard’s gear. Below is an overview of the dependencies of all pieces of gear, where and how you can find them, and how to complete the Bard’s set.

END_OF_DOCUMENT_TOKEN_TO_BE_REPLACED

Today a new campaign map was released, continuing the Lake-town themed updates lately: Lake-town: Along the Shore. It is a rather short map, consisting of only 2 parts, comprising 10 maps total. Rewards for the map parts are pretty nice, with a lot of resources to be farmed from the two boss levels. Of course, the might of the Goblins also increases exponentially, so the boss levels stick out at 7.2m and 14.4m might (!). Numbers we are used to see from temporary maps, but this one seems permanent.

Besides the Bosses, a number of levels also offer possible drops for Bard’s gear. Bard’s gear is a new set of gear aimed at Bard, the new Hero in Lake-town. The gear can be farmed/unlocked sequentially by going through the new campaign, killing the Alliance Bosses, and trading in Sage Tower. For many of the drops in campaign, you need to use Bard to attack and equip him with his gear you already have unlocked. A post about how to acquire the full set can be found HERE.

The info for this map has been added to the Campaign map which you can find HERE.

Lake-Town is the new expansion city to the Kingdoms of Middle Earth that was released late November, and which will be available to everyone after the 4th of December for free! Unlike the 4 older cities, the style of the city matches that of the human Lake-town from the movies, instead of the familiar Elven or Dwarven theme. Although a lot in the city will seem familiar, some key differences with regards to gameplay and buildings also come with the 5th city. In this article I will sum up all available information on this newest city.

END_OF_DOCUMENT_TOKEN_TO_BE_REPLACED

So Lake-Town has been among us for a few days. I’m working hard on getting all the facts straight, and will put out an article as soon as possible which I will update the coming days, but not having the 5th city myself makes it no easier I’m afraid.

What I do have is some preliminary info on the Bard’s gear that is coming out shortly, mainly through information provided by user Marcel.  Find this information at the Hero Equipment article here!

So, the good news is: Lake-Town expansion with the coveted Lake-Town 5th city has been released, hell yeah! The bad news? Instead of a AToM to win it first for a head start as promised, Kabam decided to shell out again.

You can now buy *sigh* the starter pack including Deed for 750 Mithril, or 40/50 euro/dollar….And if you do not? Wait one week and get it for free! I advise anyone to just stick it out for a week and get it for free, advantage is not worth the 750 mithril IMO. Unfortunately, that also means that my article on Lake-Town will be postponed for at least a week, but too bad….

Update: Just out of curiosity Im wondering what percentage of my readers will buy it now, so…poll 😉

Update 2: Apparently, the Deed will also be available in shop separately for around 300 mith 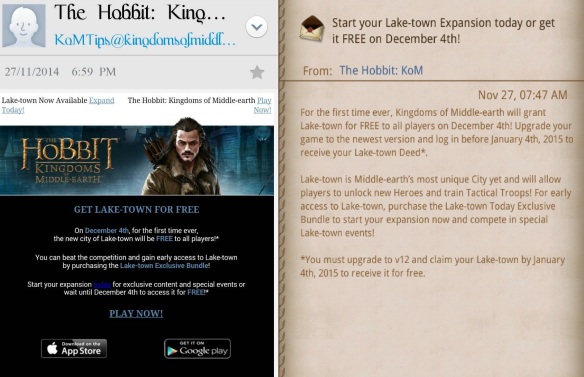 From friends from a (I believe) Spanish server, we have gotten the first impressions of Lake Town, the new 5th City that will be released shortly. It looks darker and completely different from the previous cities, and the main purpose will be to produce Pearls needed for TT training.

Also given the look of the Lake Town deed to open up Lake Town. These are gonna be incredibly rare during the first few weeks after introduction, so be sure to compete as hard as you can in the ToM that will award them first!

It seems the updates keep coming through. After yesterday’s updates, it seems preparations are being made for the inclusion of the two new Tactical Troops, namely the Lake-town Pikemen and Longbowmen. If you go to your Barracks, the building requirements (not rss) can be viewed, and they mention another few additions, seemingly connected to the new Tacticals. Continue reading to see what is known right now.

END_OF_DOCUMENT_TOKEN_TO_BE_REPLACED 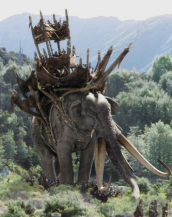 I have mentioned in past posts on campaigning and the latest update to the game, that new non-trainable ‘Tactical Troops’ had been introduced. Here, I will try to put all available information on these units. Any missing information will be added shortly. The new units are, in no particular order:

So what are they? What do they do? Where do you get them, and how should you use them. All that and perhaps more, after the break.

END_OF_DOCUMENT_TOKEN_TO_BE_REPLACED

© www.BeardMonkey.net, 2014. Unauthorized use and/or duplication of this material without express and written permission from this blog’s author and/or owner is strictly prohibited. Excerpts and links may be used, provided that full and clear credit is given to www.BeardMonkey.net with appropriate and specific direction to the original content. For contact: BeardMonkeyBlog@gmail.com
Loading Comments...