Today a new campaign map was released, continuing the Lake-town themed updates lately: Lake-town: Along the Shore. It is a rather short map, consisting of only 2 parts, comprising 10 maps total. Rewards for the map parts are pretty nice, with a lot of resources to be farmed from the two boss levels. Of course, the might of the Goblins also increases exponentially, so the boss levels stick out at 7.2m and 14.4m might (!). Numbers we are used to see from temporary maps, but this one seems permanent. 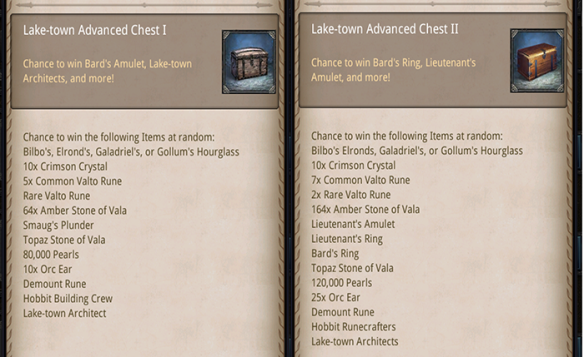 Besides the Bosses, a number of levels also offer possible drops for Bard’s gear. Bard’s gear is a new set of gear aimed at Bard, the new Hero in Lake-town. The gear can be farmed/unlocked sequentially by going through the new campaign, killing the Alliance Bosses, and trading in Sage Tower. For many of the drops in campaign, you need to use Bard to attack and equip him with his gear you already have unlocked. A post about how to acquire the full set can be found HERE.

The info for this map has been added to the Campaign map which you can find HERE.

© www.BeardMonkey.net, 2014. Unauthorized use and/or duplication of this material without express and written permission from this blog’s author and/or owner is strictly prohibited. Excerpts and links may be used, provided that full and clear credit is given to www.BeardMonkey.net with appropriate and specific direction to the original content. For contact: BeardMonkeyBlog@gmail.com
Loading Comments...