With the new Lake-town campaign map, players have the opportunity to farm the levels for Bard’s gear or get them from the new Alliance Bosses. But unlike other drops, the gear requires other gear to be farmed before it becomes available in most cases. Just like with constructing some buildings, you need to work your way up if you want the complete set of Bard’s gear. Below is an overview of the dependencies of all pieces of gear, where and how you can find them, and how to complete the Bard’s set.

Below is an overview of the basic dependencies of all Bard’s gear pieces: The amulet, ring, leather coat, bow and black arrow, the first multi-tiered gear piece. Some pieces can be farmed directly, while the others require other Bard gear items to be equipped by Bard for them to drop:

The possible drops have also been included in the campaign spread sheet, which I recommend to keep at hand, but the drop spots will also be mentioned here. So here are, in text, the steps to get a full Bard’s gear set (please note I have simply numbered the Lake-town campaign levels 1-10):

And these are the steps to get the complete set. Please note that steps 2 and 3 can be skipped and are in essence not necessary to get to the top Black Arrow I. Likewise, if you got the Amulet from the Alliance Boss, you do not need the Coat to progress on the tree to the Black Arrow I.

EDIT: To clarify, the language of the requirements in the maps make it seem as if a lot of the “OR”s above should be “AND”s, but I am (for now at least) going by the email that Kabam send out and which can be seen below: 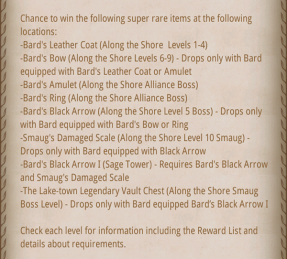 64 thoughts on “Hero Equipment: How to acquire Bard’s Gear”