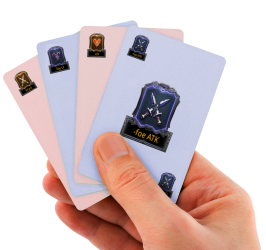 So a while ago I made a post about when to use Attack runes and when Defense runes, as there seemed to be confusion about it even among more experienced players. I recently noticed the same problem with using gear, so I thought it time to write an article on that as well. Especially with the new debuff attributes, it has indeed become less intuitive to know what to use when. In this article I will try give the basics on the available gear attributes, and on when they are best used.

So to better understand what gear to use when, we need to know when to use offensive gear or defensive gear, and have an understanding of the available bonuses. In using runes, we don’t have to make a distinction between attacking and defending per-sé, we can apply both offensive and defensive runes at the same time if we want. With gear, this is somewhat more complicated, as your hero can only have one set of gear on, and mixing and matching with attack and defense gear is advised against…so let’s first briefly overview the gear attributes.

So here’s what shapes a piece of gear to be great for offense or defense. First we have the base stats. These are fixed, and expressed in attack and life numbers. For example, the Pilfered sword has 1200 attack and 200 life (12% and 2%). These numbers cannot be changed in fully enhanced gear and so are fixed. With the ever increasing levels of gear bonus attributes, they have become less important, but still count!

Right now, gear can have two offensive attributes. A bonus to attack does just that, it increases your attack power the same way as the attack base stat or a Rune of Fury would. This is the older stat that we know from the moment gear was introduced.

The newer offensive stat is a debuff to enemy life. Basically, this counteracts the enemy’s gear Runes of Invulnerability, making it so you kill more enemies in an attack. This stat is only seen on a few fairly recent sets.

Same as with attack bonuses, we have two defense bonuses available. The older one we are all familiar with is the troop life bonus, which increases your troops life and causes you to lose less troops when an enemy attacks. When attacking larger opponents, this stat is useless.

The newer defensive stat is also a debuff, but this time to the enemy troop’s attack. This means an enemy army attacking you packs less of a punch and kills less of your troops, increasing the ratios in your advantage. As with the offensive debuff, this stat is also found only on the newer gear sets.

2. The basics rules of thumb

So the basics: When attacking larger players, focus strictly on attack, life is useless. When fighting much smaller opponents, focus on life as long as your victory is guaranteed. Everything in between is more difficult, as it would mean mixing up different types of gear, but stick to one would be my advice.

For defending, we focus on life strictly in most cases, as your army will be much larger than the opponent army and you will win no matter what attack values you have. So the rules of thumb here:

In campaign we need to strictly focus on defensive gear. This is different from using runes, where we see a difference in the types of runes needed between CHS, GK and farming. With gear however, the best choice is defensive all the way. I know this for certain, because in improving high scores, reducing the losses by 1 has much more impact on score than reducing marching size by 1.

But even more surprisingly, it happened to be the case I was a little bit behind with my high scores a few days ago. With the newly acquired gear (Replenish), I went in to farm some stones and pages in Moria and High Pass. I used a FULL army of 120k troops, and STILL improved my score vastly due to lower losses. So this can only mean it is much more important to limit troop losses than to limit army sizes.

For all other campaign related business, survival is also the aspect to focus on, so the rule of thumb is:

So in short, the rules thumb. I have combined the rules for attacking and defending into more general rules that apply in every case, as I did in the runes article:

So the last question that remains is what gear is best to use? What’s the best offensive or defensive gear set. Unfortunately, this changes with every new set introduced, but an overview can be found in this article on the best sets to use in-game.

21 thoughts on “Gear bonuses and when to use what gear”