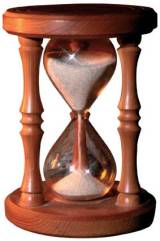 The Infinite Hourglass in Kingdoms of Middle Earth. It can do one task instantly and one task only. No matter how long…..although I did read one report that put the max time of it on 99 days in actuality. Now you might wonder what to spend this beast on? What is really worth its use? Most people will come to the conclusion of using it for one of the level 10 researches in your Academy.

But there is another theoretical great use for using this item. Here’s how:

Ok, so what if you use it for troop production? Crazy you say! You never get to queue a training task that makes it worth to spend the Infinite Hourglass on! But you’d be wrong. So here’s the setup. This works best if you have just acquired your Second or Third city and still need to construct most of it.

First, construct one barracks, but leave it at the level of the unit you want to train. Same with Stable/Armory/Forge; Construct ONLY WHAT YOU NEED!

FILL the rest of your city COMPLETELY with Homes, and level them up as high as possible. Figure out what number you want eventually in that city; that number of homes can be HBC’ed and runed if you want. Homes have very low construction times, so this shouldn’t take TOO long.

Set taxes to zero, do not waste population on resource buildings, and wait for max population to be reached. So what we have now is a city which is incredibly slow at producing troops, but which has the (almost) highest idle population available. Are you starting to see it? You are gonna need MASSIVE supplies of resources, so make sure you farmed millions of it, or gotten it from alliance members

Queue the maximum amount of troops you want to train (unfortunately, this can only be one troop type–> 1 hourglass only). This task should take a tremendous amount of time! Now of course you use your Infinite Hourglass, and presto! You’ve put it to good use. Afterwards, just demolish a number of homes and replace them with barracks, and build up your city as normal.

As to what troops to use, well, T1 means you can build more homes, but T2 and T3 are relatively much slower in training, making the hourglass much more valuable, but that’s up to you!

7 thoughts on “Infinite Hourglass: One great use!”