Kabam went ahead and made another announcement for Lake-Town, the fifth city which will be released shortly and which is being tested on a few servers at the moment, but not mine unfortunately: (click for bigger version) 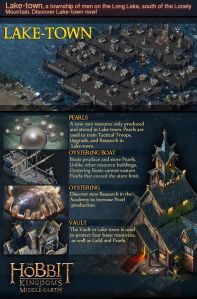 So in essence, Lake-Town will function like your other cities, but resource production will focus on Pearls, which serve as resources for training tactical troops, and which are produced with the help of Oyestering Boats. Production is sped up with the new research Oystering in your academy. Furthermore, the Lake-Town Vault protects these Pearls but also your Gold from now on, and of course a new range of heroes will be introduced, such as Bard the Bowman, to level up and equip with their very own gear.

That’s it for now, any more news will be posted as soon as possible!

© www.BeardMonkey.net, 2014. Unauthorized use and/or duplication of this material without express and written permission from this blog’s author and/or owner is strictly prohibited. Excerpts and links may be used, provided that full and clear credit is given to www.BeardMonkey.net with appropriate and specific direction to the original content. For contact: BeardMonkeyBlog@gmail.com
Loading Comments...
Comment
×