With the new update to the game, 4th cities can be runecrafted, and runecrafting up to level *11 is finally possible, although a pain in the ass. Just think about the number of Hobbit Runecrafters you need to to be able to train all Tier 4 units and then think about how available these things are to get your hands on. But I think it is a great time to go over the topic of forging runes, the runes you need to get to level *10 in the first place.

So where do you get these runes? What do you use them for, and how? Which trade from the Sage tower is most profitable? And how many do you need to upgrade your buildings. In this post, I will try to combine all available information on the topic.

In short, runecrafting means you have an additional 11 levels you can add to a select number of buildings. These levels are denoted with a star in front of them, so *1 to *11. There is really nothing special about the process itself. Runecraftable buildings just allow you to keep leveling beyond level 10. Runecrafting a building gives special bonuses which are different for each building, but usually coincide with their function in levels 1-10; runecrafted Homes give more population, and the Musterfield allows you to send out more troops per army.

What runes are there and where do runes come into play?

Contrary to what you might expect, you don’t need runes for each level of runecrafting. I myself was pleasantly surprised to find out I could runecraft available buildings to *3 for minimal time and resources and without needing runes. In actuality, you only need runes at 3 moments going from *1 to *11:

How many do you need of those?

Depending on how far you want to take your Runecrafting, it can cost you you quite a bit of runes, especially when you want to upgrade four cities! To upgrade one building however, you need the following amounts of runes:

How do you get the runes?

There are two ways to get a hold of these three kinds of runes. The first is to win them in chests that you can buy in the shop sometimes, as well as in chests you can win in Galadriels Premium game. All three types of runes have been available in chests, but they come and go so if you want to buy them, keep an eye out for them in the shop (and don’t expect them to be cheap). 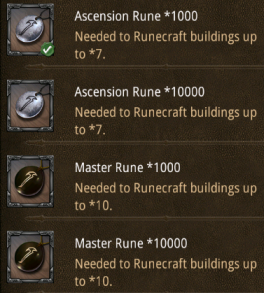 The second method is by farming Forge runes in certain campaign chapters. The boss maps of all parts from Clearing the High Pass, Avenging Moria and Mirkwood have a chance to drop forge runes in differing quantities reflecting the maps strength.

Ascension runes and Master runes cannot be found directly in the game, but are instead upgrades which you can trade in your Sage tower at the cost of the Forge runes you can find yourself (see picture).

An Ascension rune costs about 4 Forge runes, while a Master rune costs around 10 Forge runes, making them hard to get by, so be sure what you spend them on. Further on in this post I’ll detail which of these deals is most profitable to use.

Where do which numbers of Forge runes drop in campaign exactly?

As said previously, the Forge runes drop in the Mirkwood, High Pass and Moria chapters at the boss levels of each map part. Drop rates are a bit difficult to state, but from my experience it can be anywhere between 10% and 50% when emptying a full stamina bar.

The exact numbers of runes dropped per map are stated below. Missing numbers are filled in as soon as available. The numbers are also to be found in the Campaign spreadsheet for your convenience by the way. (Thanks to LucilleTwo at KoMMercenaries for filing in the blanks!)

Where is farming most profitable?

The best way to look at this is comparing the number of attack points of the goblin army of a map to the number of runes dropped there (as stated in the picture above). Dividing them gives an indication of the reward and losses you will sustain farming a certain map.

In conclusion, if you need a small number of runes (really small), go for the lower maps. I personally go for Mirkwood part 4 boss, though not for very specific reasons.

Basically, there is a trade-off between low level and high level maps. If you have a ton of stamina refills laying around, you can go for lower maps to lower losses. If you do not, and do not mind losing some might, go for Moria for a quick cash-in. Find your sweet spot and farm away.

Which Sage tower trade is most profitable?

So, how do these trades stack up to each other? Well, in everyday life, when you buy something in bulk, you can expect a discount. Same principle applies here: The bigger trades offer better returns. Also a usual truth is that each step in between costs you extra. Once again same here, meaning that if you need Master runes, try to trade them against Forge runes, instead of getting Ascension runes first. Here are the details (the black circles are the ratios of individual trades, and colored arrows denote different paths you can take in trading towards Master runes):

As you can see, the biggest trades offer the best ratios, and if you need Master runes and have a lot of Forge runes, trade them in directly. But usual these are steps you would have to take well in advance to prevent getting stuck with excess Ascension runes. On the other hand, the decreases in ratios are not earth shaking, but still, at around 26% difference between the best and worst, this will mean a lot of extra farming for Forge runes if you want to upgrade a lot of buildings to level *10.

Well, that is about it when it comes to the Forging runes. If I’ve missed anything or made a mistake, please leave a comment. Cheers!

15 thoughts on “Forge runes: All you need to know”