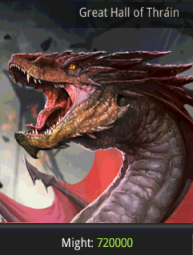 The Campaign Spreadsheet has finally been updated! It has been a while since the last post, and in the mean time T4 and T5 troops were introduced fully, mistakes have been pointed out, and requests were made to complete the Moria campaign and add more attack bonus stats to fill in.

Read on to learn what changes and improvements have been made and to find the download link of the spreadsheet. As usual, any comments or suggestions are welcomed!

Thanks to all who commented and pointed out mistakes. The changes:

Find the new Campaign sheet at this link

Download the sheet, fill in your information on page 1 and campaign away!

Note 1: As usual, the suggested troop numbers are meant to reflect the minimum of troops needed to win in one combat round, NOT to get the highest campaign score possible!

Note 2: I suggest leaving the “Strong against” attack bonus at zero, as most maps should be attacked with one troop type for highest scores, which makes calculating the overall bonus virtually impossible….