Like mentioned in my post on update 9.1.0, it brought to the game the exciting new feature of Alliance Boss Battles.

At the time of writing that piece, the feature had not been fully implemented yet, but it has in the mean time, and it is such an addition it merits its own article. So here, I will lay out all the necessary information you need about this feature.

So, what are alliance boss battles?

Basically, boss battles are prolonged battles which, for individual players, work similar to normal campaign maps; You click one, enter hero and troops, apply buffs if you want (you shouldn’t), press attack and voila. Difference is that you most likely will not kill the boss. In fact, you’re not meant to defeat them on your own. All alliance members can place an attack on a summoned boss, with any number of troops, to have a chance to get loot from him. Once he is killed, loot goes to the summoner and all players who attacked.

And the loot is basically what you do this for, if not for teamwork. Similar to the Swift stones (troop training times buff) and artifacts I-X (defense/attack buff), a new fourth category of buffs has appeared at your city guardian: Gatherer stones, and they buff resource production. 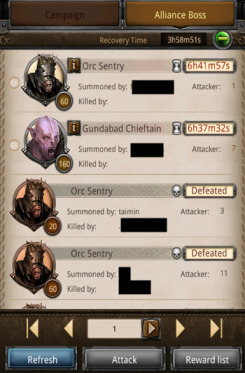 Where do I find the battles?

You can find ongoing boss battles in your normal campaign screen. Press it and you will see a Boss Battle button on the top right. Pressing that will give you the list of open and defeated bosses, a claim rewards button, and options to attack a boss and get more info on a battle. Each battle has a named boss, which are all familiars from normal campaign maps. They have a certain level which corresponds roughly to the level of the campaign map from which they spawned. In the middle is stated who spawned the boss and who killed it (if it is defeated of course). To the right you can see how many alliance members already attacked it. This excludes the summoner.

How do these battles work?

You can enter or participate in a battle in two ways: spawn a boss yourself or attack an open battle yourself. As mentioned, attacking a boss works out the same as any attack in the game; press attack, select hero/troops/buffs and go at it. If you choose to attack an open boss, be selective. Look at your current level of guardian rss buff, and attack the bosses that net you the stones for the next level. This becomes quite apparent once you realize you can only attack one boss every 4 hours!!

You can also press the little “i” button to bring up current state of affairs on a particular battle. Once opened, it looks similar to a normal campaign level screen. The boss is shown, along with the number of troops left.

All alliance members can have a chance to attack him, and once defeated, all participants get rewards. It is therefor important, especially with the first lower bosses, to attack with small forces, so they aren’t defeated before everyone has had a chance to fight. Once it is time to finish a boss, go at full strength if you feel the need and haven’t participated in that battle yet. Note that boss battle last up to 7 hours max! So kill within 7 hours or no rewards!

Don’t worry about sending large armies in this case; even if you do not defeat the boss in one attack (because these buggers are hella strong), you will not lose a full 100k t1 army on an attack. I attacked a lvl 120-160 with 100k t1, and killed a few hundreds, but also only lost something like 1k troops. So the game is specifically designed to allow and necessitate even multiple attacks from more members.

Troop wise, the enemy seems to consist of T4 mounted units solely, but they are stronger than one would expect normally. As an example, I attacked with a tiny wave of 20 T5 once, against one of the lowest bosses, and killed zero enemies. That is using a 220, though no runes. This normally doesnt make sense, so I’ll say again, there is some different math behind these fights…

How and where do you summon the Bosses?

If you want to go the other route and summon, all you have to do is play campaign maps. Boss summons are random events which happen when attacking certain campaign levels. So far, my alliance has stuck to Clearing the High Pass, Avenging Moria, and Mirkwood, all with confirmed summons. I wasted a fair deal of stamina on Necromancer but got nothing.

Once summoned, that particular level’s boss can only be summoned again once the old one is defeated. Within a campaign map, all parts and all levels can summon. I have had summons from the boss levels on Avenging Moria part 3, and from the very first level on part 1 of Clearing the High pass.

Unlike attacking existing battles, summoning can be done as long as you have stamina points, no 4 hour cool down. Of course the assumption here that that level’s boss hasn’t been summoned yet by someone else.

Who can summon the Bosses?

Anyone! As long as that boss isn’t summoned yet, everyone can attack the campaign maps in order to have that chance summon.

What are the rewards?

As mentioned, the primary rewards come in the form of chests which contain a certain level of gatherer’s stones, which you can exchange for Guardian buffs in the Guardian himself. Once a boss is defeated, you can claim the reward, and the chest will appear in your inventory along the other chests in your possession.

Chests contain guaranteed stones for the guardian buff. Hourglasses, from the description, look guaranteed as well, but this isn’t the case. Especially lower level chests usually only contain stones. Other items include Vala Stones, which can be donated for the Alliance Shop.

Although the chests seem identical, it does appear from Kabam communication that the chests of the summoner and the person who kills the boss are actually of better quality compared to those who just place a small hit in.

Where do which bosses spawn?

So far only three campaign maps spawn bosses. Clearing the High Pass parts 1-5 drop Stones 1-5. Same goes for Mirkwood parts 1-5. Avenging Moria parts 1-5 drop Stones 6-10. For each map part, bosses strength is reflected by the boss level of that parts boss map. Below is an overview of the bosses from several parts of the campaign. Missing maps will be included later on. 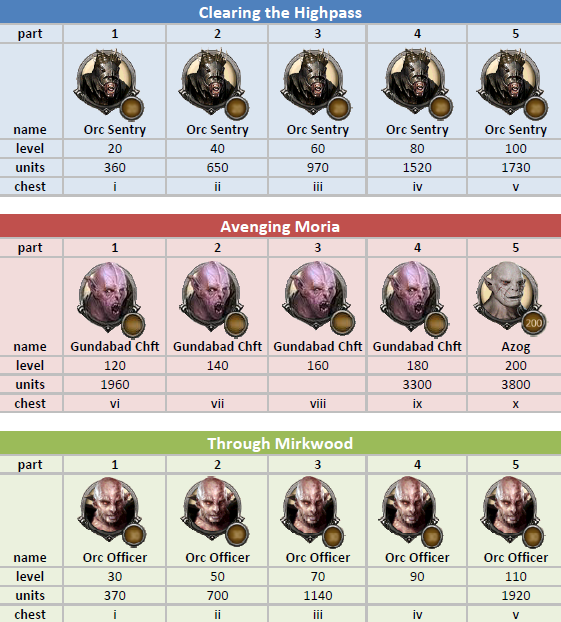 Additionally, the new Lake-town campaign map spawns 210 and 250 Alliance Bosses, which drop chests which have a chance of containing Bard’s amulet and ring, as well as other items such as Orc Ears and Legendary pages. They do not drop Stones for the Guardian as the other bosses do.

So thats all I know so far about Boss battles. If I learn more, I will update this article, and in the mean time, if you have any additions, please comment below…. cheers!!

34 thoughts on “Alliance Boss Battles: All you need to know”